It’s time to raise a glass to Wayside Cider, which this week christens its new headquarters in Andes.

The move, first reported in Catskill Eats this spring, will allow the two-year-old company to expand production of its locally sourced hard cider, which partners Irene Hussey and Alex Wilson have been fermenting and bottling in a family farm garage in Delhi since 2014.

The production room, which occupies most of the large barn formerly known as the Decker building, is not open to the public. But as of this Friday night, a new tap room welcomes fans of Wayside’s offerings.

Tucked down a dead-end lane just off Main Street, it’s a lovely hangout spot, with an indoor bar and tasting room arranged around large windows overlooking an outdoor courtyard with picnic tables and a fire pit. A second building, formerly a carriage house, offers covered outdoor seating and an upstairs space slated to eventually host events.

Sean Scherer of Andes curio shop Kabinett & Kammer designed the renovation of the barn. The Wayside team put in most of the elbow grease, with assists from friends, family members and a crew of college students.

The tap room and production facility share a barn formerly known as the Decker building in Andes. Photo by Catskill Eats 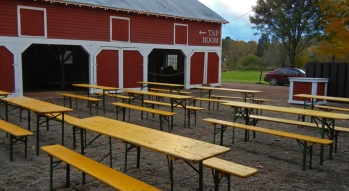 A former carriage house and the barn that houses the tap room and production space frame a courtyard. Photo by Catskill Eats 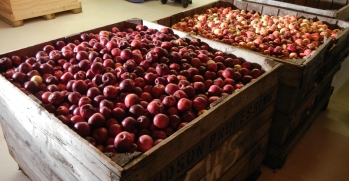 Wayside Cider sources all of its apples from the Catskills and the Hudson Valley. This fall’s harvest awaits the press. Photo by Catskill Eats

The cidery about tripled its production from its first year to its second, with this year’s yield approaching 15,000 bottles. Its products are served and sold in Catskill-area restaurants and retail shops, as well as in the NYC metro area.

Wayside’s new tap room joins a growing number of Andes spots to enjoy locally grown and produced food and beverages. The team behind Argyle Farms took over and reopened the Andes General Store last fall, offering local meats, cheeses and other farm products. A new brewery, Weaver Hollow Farmhouse Ales, is under construction in the former Greenfish Adventure Sports building and plans to open next year.

Related: Read more about Wayside Cider in our 2015 profile.