A drive down any Catskill back road right now reveals apple trees heavily burdened by ripening fruit. By most accounts, this fall’s harvest will be a banner one. But don’t harp about that to Wayside Cider partners Irene Hussey and Alex Wilson, who are holding their breath with farmers’ superstition.

“These next three weeks are the worst part, the prepping and the waiting,” Hussey said. “Sitting up at night, wondering how the apples are.”

Barring unforeseen crop disasters, the fledgling farm cidery in Delhi is poised for enormous growth in its second year, with plans to produce at least twice and maybe as much as three times more hard cider than last year. Its 2014 harvest yielded 4,500 bottles, which have almost disappeared from the market.

“We had to stop taking on new customers after about a month in business,” Wilson said. “We felt like 4,500 bottles was the right amount to test whether we had a good product.”

Restaurants and retail locations, which each make up about half of Wayside’s business, already are lining up for inventory from the cidery’s sophomore year output, expected to fall between 10,000 and 15,000 bottles.

The two-person team of proprietors does all of the picking, pressing and processing of a combination of wild and heirloom Catskill apples, along with all the marketing and distribution. Hussey is the chief cider-maker while Wilson is the primary front-man, but they both wear all the hats in the business. The pair met through mutual acquaintances, and then joined forces to found Wayside last year after competing in an amateur cider-making competition hosted by Table on Ten in Bloomville. 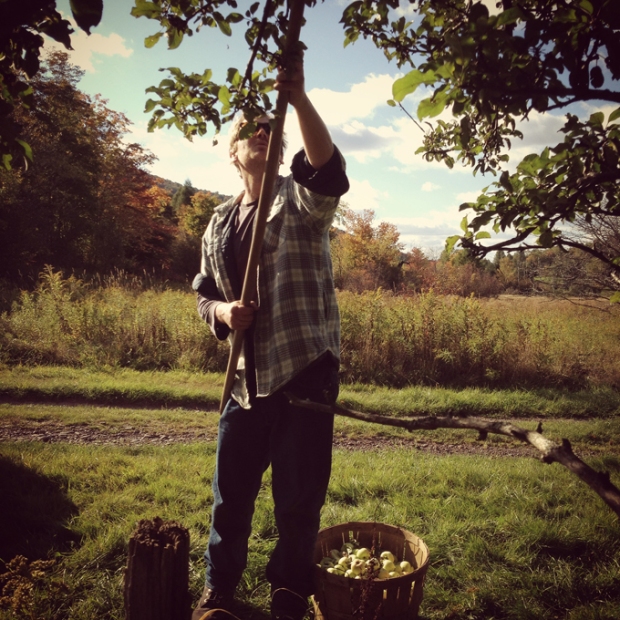 Wayside’s portfolio features two mainstay products and a changing roster of special creations. The flagship, which is called Catskill and was named one of Bloomberg’s five “Must-Try Modern American Ciders” in May, is aged in bourbon-soaked oak barrels handed down from Delaware Phoenix Distillery in nearby Walton. The other is called Half-Wild, a combination of wild local apples and cultivated dessert varieties like Gala and Jonagold, sourced from commercial Hudson Valley orchards. A third variety, the Skinny Dip, was produced from a single pressing of dessert varieties and given a little bite with the addition of locally harvested quince.

Wilson and Hussey also handle all the customer deliveries, driving cases in the back of a Subaru from their headquarters at High Meadows Farm just outside Delhi to stores and restaurants throughout the Catskills and all the way down to Manhattan and Brooklyn. Their products are served or sold by the bottle in seven city locations, including Wassail, an all-cider bar and restaurant on the Lower East Side.

While they wait for their main ingredient to finish ripening, Wilson and Hussey have several other cider-related projects going. One is a collaboration with Dan Pucci, a Catskills native who now curates the cider offerings at Wassail and last month was tapped as one of Zagat’s “30 Under 30” food industry rock stars. With Pucci’s help, Wayside is collecting urban-grown fruit–apples, crabapples, pears and hawthorns–to create a 250-gallon batch of NYC-sourced cider as a demonstration project. Fruit contributors will be rewarded with finished cider; the rest will be sold under Wayside’s label. (Email for more info: wayside.cider@gmail.com.)

“The idea of an urban cider is to use all the fruit growing the in the city into something of value (rather than it just falling),” Pucci said. “Hopefully it will bring awareness of cider and help eliminate and perceptions of mystery. I want cider to be accessible.”

Also this summer, Wayside opened a combination store, farmers’ market and tasting room at 11 Delaware Ave. in Andes, a joint effort with Sean Scherer, the proprietor of curiosity shop Kabinett & Kammer. Called The Annex, it is open Saturdays only, from 11 a.m. to 5 p.m., and sells antiquities and oddities from K & K, along with locally made cheese, locally grown flowers and produce and other small-batch Catskills goodies.

Coming up, Wayside will be offering samples at two events in Bovina: the Open Barn and Studio Tour on Aug. 22, and Bovina Farm Day on Sept. 6. Dinners featuring cider pairings are planned at the Annex and in the city this fall. Collaborations with other local craft-beverage producers are also in the works, including an apple brandy, a project with Delaware Phoenix. Hussey and Wilson also planted 100 apple trees this spring, with an eye toward eventually having 30 acres of orchards to harvest.

They are not alone in their ambition; cideries are one of the fastest-growing segments of New York State’s booming craft beverage market, thanks largely to the farm cidery law passed in 2013, which offered incentives for small cider-makers using New York State grown produce. As of October 2014, the one-year anniversary of the legislation, there were 29 cideries statewide, up from eight the previous year. Delaware County is home to one other in addition to Wayside, Awestruck Ciders in Walton.

“Cider is a growing market and people are looking to try, taste and experiment,” Pucci said. “They are at a stage where they want to explore.”

Wayside’s owners see their business as a chance to contribute to, and participate in, a larger community built around Catskill-made food and drinks.

“It’s about creating a culture of quality, and putting money back into the local economy. There’s so much opportunity here in the Catskills, in the food sector, for collaborations and interdependencies,” said Wilson, a native of England who relocated to the Catskills after a filmmaking career in NYC. “There’s a little bit more time, a little bit less pressure. It makes you think about doing things unconventionally.”