Maplehurst Family Restaurant opened in late May in Roxbury.

Richard Neff arrived in Roxbury this winter, having retired from a career as a crane operator in NYC and a second job cooking nights in other people’s restaurants downstate. A self-described “farm boy” who hails from Levittown on Long Island, Neff knew the beauty of the Catskills from years of camping in Cairo, over in Greene County.

Sixteen days after his retirement became official, he and his wife Tanya completed a deal to buy 75 Maple Road, a large restaurant and inn that backs onto Route 30 just north of downtown. They named it Maplehurst Family Restaurant and Pizzeria, and set about preparing to open.

“I retired Jan. 1, closed on this place Jan. 17, and have never worked so hard in my life,” Neff said one afternoon last week in his 42-seat dining room, which opened for business the week before Memorial Day.

The building, which has housed various other operations, including restaurants called Veronica’s and Benny’s, had sat vacant for many years and needed a lot of work. Major kitchen renovations and a total cosmetic overhaul have turned it into his vision of a homestyle restaurant that serves comfort food to its neighbors. The new name is a nod to the 19th-century building’s original business, a boarding house known as Maple Hurst, Neff said.

The menu is deep, offering 18-inch pizzas between $15 and $20, and a wide range of Italian entrees such as eggplant parmesan and lasagna (around $20), which Neff learned to cook from his former wife’s grandmother. But there are also plenty of classic American dishes like steaks, ribs and burgers, while nightly specials run the gamut from deep-fried turkey (a popular offering last week) to a variety of traditional Ukrainian dishes, in homage to Tanya’s homeland.

“Everything I do is slow,” Neff says. “My ribs marinate for two days, and cook for eight hours. They fall off the bone.”

The restaurant employs a supporting cast of locals, including the “Pizza Man” of Grand Gorge and Margaretville, Nick Maloxes, who used to run Pizza Palace. Sheila Matson, who has worked in various local establishments since moving to the region 14 years ago, helps run the business and staff the front of the house.

Neff is also sourcing some ingredients locally, including eggs from Cindy’s farm stand next door and produce from Shaul Farms just up the road in Fultonham. He makes some desserts himself, including bananas Foster, a personal favorite.

Tanya Neff oversaw the decor, hiring a painter from the city to adorn the walls with hand-drawn grapes, which took four days. Details such as a new gas-powered fireplace and an ornate dessert cart have been added. Renovations included plumbing and heating by Harold Peters, and Neff says he couldn’t have opened without the help of local handyman Ryan Sprague, who was hanging wallpaper imported from Ukraine in the soon-to-open bar area last week. 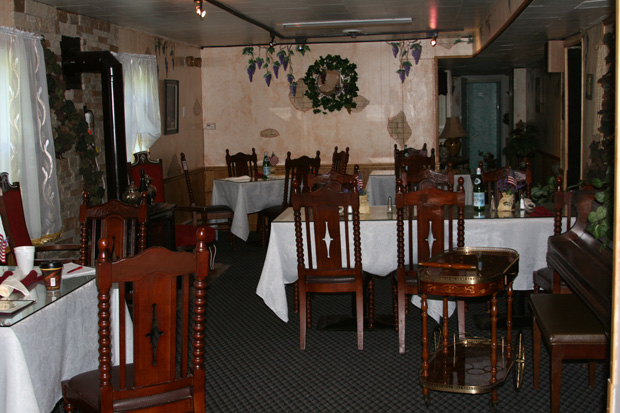 The redone dining room seats 42; there are also outdoor tables and a separate bar area.

“Everyone has been so helpful and welcoming. I’m really grateful,” Neff said.

The restaurant is currently open for dinner from 5 to 9 p.m. Tuesday through Sunday, and closed on Mondays. It offers takeout and accepts most credit cards, but not checks. A full-bar liquor permit is pending, and when that is approved, likely next month, Neff plans to launch later hours in the separate bar area, offering drinks, a smaller late-night menu and takeout until 11 p.m.

Further down the road, plans include breakfast and lunch hours, a revamped banquet room to cater private parties, and a total renovation of the upstairs spaces. There are 10 rooms on the second floor, which the Neffs plan to eventually reconfigure into five master suites, with modern amenities such as jacuzzi tubs.

All in all, it’s an ambitious agenda at a time when, despite lots of positive press about the region, pretty much every other restaurant in Roxbury is for sale, including Cassie’s Cafe, Queens Mountain Cafe and The Public Restaurant and Lounge downtown, as well as the T Bar Saloon just a few miles south, and this spring also brought the shuttering of Main Street’s East Branch Cafe. [Update: Public owner Nickolett Sprague contacted us to clarify that while the building that houses her restaurant is on the market, the restaurant business is not, and has a lease through 2023.]

Asked why he chose Roxbury to fulfill his lifelong dream of owning a restaurant, Neff said: “It’s gorgeous here; look outside!”