Digging out at Roxbury Wine & Spirits. Photo courtesy of the store.

The ski resorts are celebrating nearly three feet of fresh powder while the farmers are working overtime, plowing through drifts to feed and house their animals. Many roads and businesses remain closed. So how much snow did the Catskills really get in yesterday’s nor’easter? Well, that depends on what you were drinking.

In Schoharie County, it was four bottles deep, according to the folks at 1857 Spirits, who distill vodka from potatoes grown at Barber’s Farm, a sixth-generation family operation just south of Middleburgh. 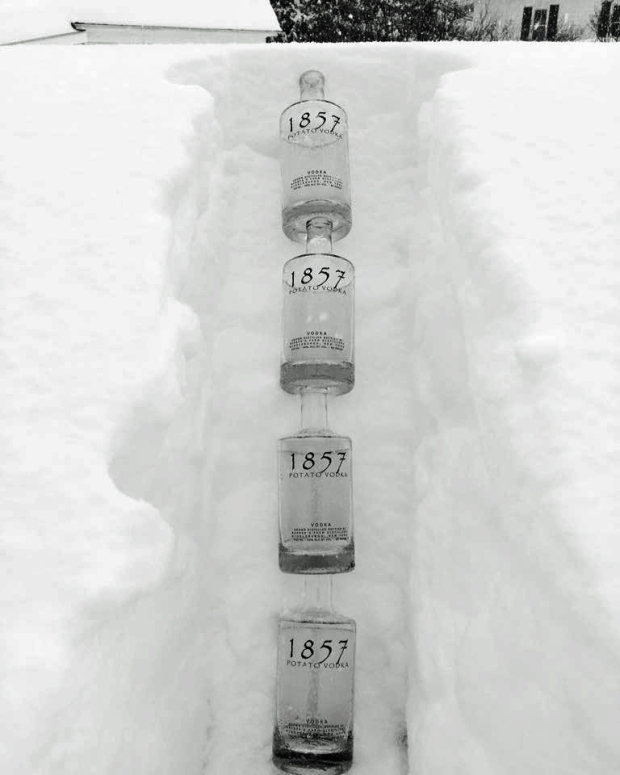 Four bottles deep was the diagnosis at 1857 Spirits in Schoharie County. Photo via the distillery’s Facebook page.

In Roxbury, it was plenty deep enough to chill a bottle of prosecco long before it even stopped falling, Roxbury Wine & Spirits proprietor Jeff Tichenor demonstrated.

West Kill Brewing co-brewer Patrick Allen measured with Founder’s All Day IPA, since West Kill’s own beers are still a few weeks away.

If it's snowing all day there's only one beer to satisfy your cabin fever. #alldayipa by @foundersbrewing. We are 4 deep here in the #catskills

Make the mimos-t out of it🍾🥂

How much longer until the return of outdoor dining? If the deck at The Laundrette in Narrowsburg is any indication, it’s going to be a little while.

We will try and open at 5 today. Gotta get through the drifts…