Work has begun to bring the former Woodstock Lodge back to its former glory. Photo courtesy of the inn.

A landmark Woodstock inn and restaurant infamous for having its flaws showcased on national television is ready to kick off a new and happier chapter in its history.

Under new owners, The Lodge, known previously as The Woodstock Lodge and Pinecrest Lodge, is undergoing a comprehensive overhaul that will debut next year, public relations director Abbe Aronson tells Catskill Eats.

But in the meantime, the new proprietors are test-driving the restaurant and bar with a public dance party on Saturday night, the first of several events this summer. It’s the softest of soft launches, with drinks, small bites and a DJ.

“If everything here could be stamped ‘work in progress,’ it would be, ” Aronson said, noting the deck was being repainted as she spoke. 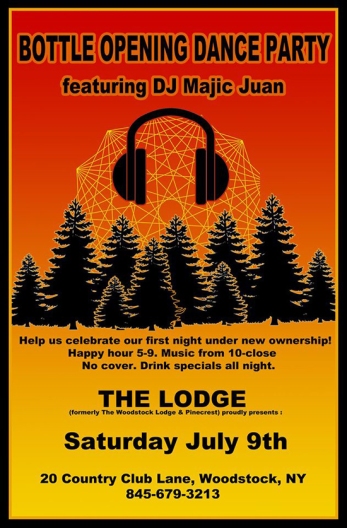 The inn at 20 Country Club Lane has undergone many iterations. In 2014, then-owners Carlos and Annie Pombo were featured on the Travel Channel reality TV show “Hotel Impossible,” in which host Anthony Melchiorri swoops into struggling properties to offer constructive criticism and advice on improvements. In the episode — recapped online — Melchiorri’s take on the condition of the lodge and its restaurant, Havana Club & Grille, led to heated confrontations on camera. The show eventually led to threats of litigation, the Woodstock Times reported in November 2014. The property then went on the market, where it was listed for $1.85 million in February 2015 (see a video from that listing here). It eventually dropped to $1.35 million in April 2015, when it was featured on the blog Upstater.

Enter a trio of new owners, who closed on the 6.5-acre property today: Brian Parillo, Michael Skurnick and Jack Waterman. Parillo, who has run the lodge’s bar for the previous owners, will be the primary on-site partner. The team has hired chef Jonathan Kornbluth, a veteran of the Santa Fe Woodstock, to helm the kitchen. Initially, the restaurant will serve a selection of “bar munchies and late-night food,” eventually expanding to full meal service, including a heavy emphasis on brunch, Aronson said.

Rounding out the menu are six burger variations, including a veggie with portobello mushrooms, and small bites such as tempura green beans and garlic sesame edamame.

The former Havana Club & Grille is in for a revamp. Photo via Zillow

“For this weekend, and for the rest of the month, we’ll have nibbles as we test out some of our new items, specialty cocktails and homemade ginger beer,” Aronson said. “Once Jonathan Kornbluth has the kitchen up and running, he’ll then turn his attention to breakfast and brunch, for which he has many ideas.”

On the lodging side, the property is undergoing a “surface-only” renovation for this season, with new linens, new beds, new flooring and some plumbing updates in the cabins that are servicable, Aronson said.  A full overhaul on the entire property—cabins, bar, restaurant, pool, grounds, spa treatment center—will be completed in time for the spring 2017 season, she said.

“We think the property will be restored to not only its original luster but will be another fantastic lodge option here in Woodstock, with a modern yet bohemian feel, luxurious but true to its roots,” Aronson said.

Find The Lodge at 20 Country Club Lane in Woodstock and on Facebook and Instagram. The public is invited to the launch party Saturday, July 9. Happy hour from 5 to 10 p.m. and music by DJ Majic Juan from 10 p.m. to close. No cover.

1 Comment on The Lodge, a Piece of Woodstock History, Comes Back to Life