The “bar” part has to wait a little while, but this Thursday, June 9, proprietors Rachael Sloan and Gregg Lockwood will throw open the doors to their new restaurant, The Brown Bar and Kitchen in Hensonville, a hamlet of the Greene County town of Windham.

Aiming to be “a fun place” with communal tables serving humanely raised and organic meats, wild-caught fish and “homemade everything,” Brown Bar and Kitchen has taken over the building most recently home to The Frog’s House, a tavern and eatery that closed about five years ago.

Sloan runs the front of the house and Lockwood helms the kitchen. This is Lockwood’s third restaurant venture and marks a return home for the Shandaken native, whose first was in Berlin. Called The Bird, it garnered a 2008 mention in Variety for its “gut-busting portions of sheer, greasy joy.”

The pair met at Lockwood’s second restaurant, which was also called The Bird, in Sloan’s hometown of Jackson, Wy., which was known for killer burgers . After selling it, the couple spent two years in Mexico before coming to the Catskills for the next chapter of their careers. They found the building for rent while meandering through the Greene County mountaintop region one day this spring, Sloan told Catskill Eats this week. 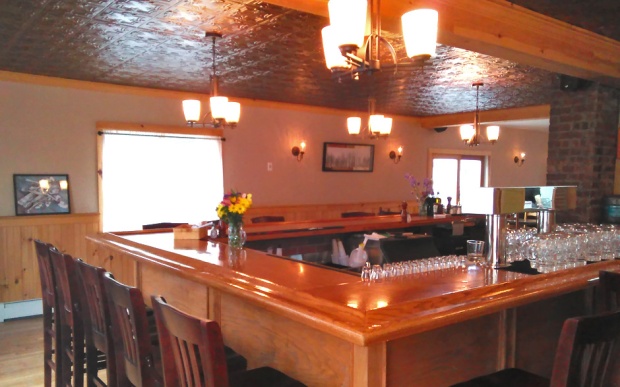 Hensonville is just a couple of miles outside Windham proper, and about seven miles from Hunter, so the building’s location on Route 296, the main drag between the two ski towns, was attractive, Sloan said.

Brown Bar and Kitchen plans to focus on dinner. But state approval of their bar permit is taking a little longer than expected, so the husband and wife team decided to start with lunch this week. Dinner service will begin as soon as they can serve alcohol, which should be soon, Sloan said.

The restaurant, which seats 48 inside and 36 more on its deck, joins another Hensonville newcomer, Hammo’s Brewpub & Lodge, a microbrewery and inn that opened in August 2015 just down the street. (Read that story here.)

The opening menu includes a little bit of everything: a few breakfast dishes (bacon and eggs for $12, french toast stuffed with marscapone and jam for $11) and a variety of sandwiches at $16 (pulled pork, club, philly cheese steak). Larger plates include schnitzel ($16), fish and chips ($18), and ribeye steaks from 8 to 16 ounces ($22-$33). And then there’s the extensive burger menu, which runs from $12 to $22. (See the complete lunch menu here.)

The pork is all from pasture-raised Berkshire pigs, the beef and turkey are certified organic and the burgers are hand-ground in-house. Everything from the salad dressings to the ice cream is from scratch, Sloan said.

When the liquor permit is approved, the bar will serve a variety of draft beers, with a heavy focus on German brews. The wine list is still under development, Sloan said, while the cocktails will reflect the restaurant’s overall approach of “simplicity and quality.”

For now, the iced tea is on the house, while a variety of other non-alcoholic beverages are available. They include lemonade and “Spindrift Soda” — sparkling water, crushed fruit and cane sugar in three flavors: blackberry, grapefruit and ginger beer.

5 Comments on New in Windham: The Brown Bar and Kitchen