After a career studded with critics’ stars and James Beard Award nominations, working in renowned restaurants and writing cookbooks, Italian Chef Cesare Casella‘s pursuit of a passion project has led him to a tiny storefront in the Sullivan County hamlet of Hurleyville.

“We’re going to do good, traditional products,” Casella told Catskill Eats in an exclusive interview this week. “I wanted to create a place with a connection to the land, to the terroir.”

The shop, at 210 Main St., will be modeled after an Italian salumeria, a small butcher and grocery like the ones of Casella’s childhood in Lucca, Italy. 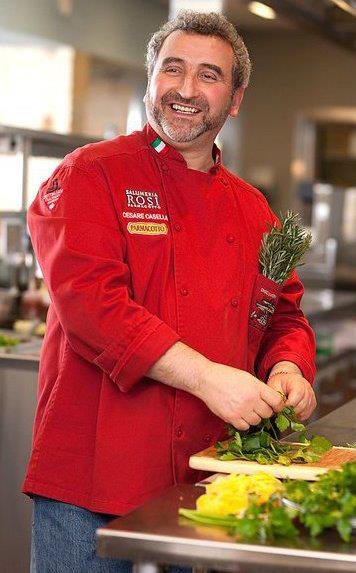 The rear of the building will house the production, aging and fermenting of a variety of cured meats. Casella is importing most of his equipment from Italy, and will bring expert Italian butchers and sausage-makers to Hurleyville to train his staff over the summer. He plans to seek U.S. Department of Agriculture certification, which will allow him to market his products wholesale to restaurants. At full capacity, about a year after opening, Casella’s will produce about 2,000 pounds per week, he said.

The new venture is in partnership with The Center for Discovery, a large nonprofit whose core mission is operating homes, schools and clinics that provide care for children and adults with developmental disabilities. Part of the center’s approach is a “profound belief in the power of real food,” a lot of which is grown at its Catskills farms. Known collectively as Thanksgiving Farm, they include more than 100 acres at Stonewall Preserve in Hurleyville, which sits about seven miles due north of Monticello.

Separately, as part of its community outreach and development goals, the Center for Discovery began investing in Hurleyville real estate about 10 years ago, buying and rehabilitating old buildings in an effort to revive a hamlet that has struggled economically since the Borscht Belt days ended. Several revamped buildings are now populated with the center’s own initiatives, such as the Hurleyville Market, a local-foods store and cafe. The redevelopment is picking up steam, with the debut this winter of two huge new projects, the Hurleyville Maker’s Lab and the Hurleyville Arts Centre. In addition to its own and affiliated projects, the nonprofit also recruits local and regional businesses and organizations as tenants. A new gastropub, Pickled Owl, launched in August using the latter model. (Read that story here.)

Casella’s involvement with the Center for Discovery began nearly 20 years ago, with a cow.

As Casella tells it, in a thick Italian accent, the story goes like this: During the 1990s and 2000s, he was working as an executive chef in several high-profile New York City restaurants, eventually striking out on his own to open and operate Beppe, Salumeria Rosi and Ristorante Rosi, all of which garnered critical praise. He published several books, including True Tuscan in 2005 and The Fundamentals of Classic Italian Cuisine in 2012, a finalist for a James Beard Award — the restaurant industry’s equivalent of an Oscar. He also built up a TV following, appearing on “Top Chef,” “Iron Chef,” Anthony Bourdain’s  “No Reservations” and other food shows.

Amid his growing fame, Casella grew nostalgic for his native Tuscany and his grandparents’ farm and set out to buy a cow for sentimental reasons. Not just any cow, but a white Chianina, an ancient Italian breed he grew up with, which was difficult to find in the States. After choosing a cow from a Texas breeder, the NYC-based chef needed a place for her to live. Scouting upstate, he found a Greene County farmer who boarded her, but also let one of his Black Angus steers impregnate her. Chagrined, Casella relocated her to the Center for Discovery, mutual friends having introduced him to leaders there in the meantime.

At his cow’s new home, Casella found a new calling. In addition to his restaurants and a role as the dean of Italian studies at the International Culinary Center in NYC, he took on a new part-time job. It began with consulting and eventually led to his overseeing the center’s Department of Nourishment Arts, which combines the organization’s farm, culinary and nutrition departments to feed clients at its facilities.

“When you have farmers, chefs and nutritionists all looking at food quality, you can see the whole picture,” said Jennifer Franck, who works with Casella. “We consider ourselves a living model of food as medicine.”

Casella has been developing a hybrid population of pigs specifically for sausage and salami. They are a cross of Duroc, Yorkshire and several other breeds — his effort to recreate a mix of the qualities he valued in Italian breeds not available here. (Descendants of his first cow still live at the center’s farm, as well.)

House-made sausage and salami were a hallmark of Casella’s restaurant career. He also began creating artisanal Italian-style salumi in the United States in 2010, under the name Giorgio’s Salami. Giorgio’s products are sold at Eataly, Heritage Foods USA and Wegman’s, and served in high-end restaurants in the city. This next chapter of his life marks a combination of that skill set with a return to his rural roots.

“I came out of the restaurant business because I did it all my life. I was very happy, but it wasn’t giving me what I wanted any more. I wanted to do something much more challenging, to put more energy in,” he said. “And really, I am a country boy.” 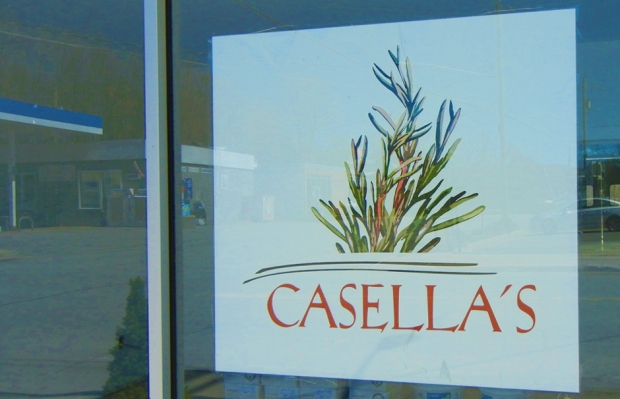 Rosemary sprigs are a personal trademark of the chef, who always wears some in his breast pocket and features them in his new company’s logo. Photo by Catskill Eats. © Catskill Eats LLC, all rights reserved.