Chef Rob Handel's kitchen at Heather Ridge Farm is just steps away from most of his ingredients. Photo by Catskill Eats

Chefs at most farm-to-table restaurants in the Catskills have to exercise a little wizardry at procurement, ordering eggs from one farm, pork shoulder from another. They maneuver around supply shortages, transportation obstacles and shelf-life issues. They compete with other buyers–increasingly so, as more big-city chefs discover the delights the upstate foodshed has to offer.

And then there’s Rob Handel of Heather Ridge Farm, who faces none of those challenges.

Handel’s kitchen is just steps away from his laying-hen coop and his pig pasture. He also has sheep, goats, cattle and many kinds of poultry to choose from. There’s an herb garden just outside the door and honey in the beehives across the way. All of it will eventually wind up on plates in the farm’s restaurant.

“I love seeing what I’m growing being taken to these new levels,” said Carol Clement, who owns the farm with her husband John Harrison. “It’s a lot more satisfying than selling a frozen pork chop, let me tell you.”

This summer marks the completion of Handel’s first year as the chef at Heather Ridge Farm, which is nestled into the side of a mountain in Preston Hollow, near the junction of Greene, Schoharie and Albany counties. His arrival last spring boosted the farm’s now-seven-year-old Bees Knees Cafe–which had begun garnering some media notice, including the New York Times— into a serious restaurant. It now serves brunch and lunch every weekend, year-round, and regular five-course chef’s tasting dinners, along with special events.

The twice-monthly Supper Club features ever-changing dishes based on what’s available on the farm. A recent dinner included a duck charcuterie plate and sous vide short ribs. October’s menus feature all-poultry meals, including guinea hen, a new addition to the farm’s flocks. A November dinner, called “Eat Like a Pig,” will showcase meat dishes from the farm’s three heritage breeds, accompanied by sides derived from fruits, nuts and plants the pasture-raised pigs foraged on the farm. Produce not grown at Heather Ridge comes from other Catskill suppliers, including Barber’s Farm in Middleburgh and Stoneledge Farm in Leeds.

“We’re walking the walk,” Clement said. “We’re not just a restaurant buying a few things from a farm and selling them as a special for a night.”

Clement and Harrison launched the farm as a business 11 years ago, selling their own meat and eggs, along with honey, sausages, and non-food items such as wool products made from the fleece of their sheep herd. Heather Ridge is Animal Welfare Approved, and raises its wide variety of creatures in small groups without antibiotics or hormones. Goods from neighboring farms and local food producers, such as cheesemakers, supplement the restaurant inventory and are sold in the farm store.

Handel took the helm of the kitchen in the spring of 2014, expanding the restaurant’s diversity and its sophistication. Having grown up in the kitchen at BlackThorne Resort, which his family owns and operates in nearby East Durham, Handel began cooking at a young age with his grandmother, who taught him about foraging, canning, making maple syrup and keeping bees. He also absorbed her love of experimentation.

“My grandmother would go to this Asian market in Albany, buy a bunch of ingredients and then bring them home and figure out what to do with them,” Handel said. “In my family, there was a spirit of adventure. There was never a mentality that you shouldn’t try something just because you haven’t done it before or you don’t know how it will work out.”

Having a full-time job as the chef at Heather Ridge is the culmination of many lifelong food-related hobbies and passions that belie Handel’s 24 years. He bakes, and for a time ran a cupcake business called Sugar & Spice, concocting combinations like sweet potato and toasted marshmallow. Like his grandmother, he keeps honeybees. He’s into charcuterie right now, making dishes like chicken livers with Moroccan spices and preserved lemons–and not only because he likes to experiment with a small curing cabinet he recently built.

“The great thing about charcuterie is all of the things that go with it: pickles, relish, chutneys,” Handel said. Many of the condiments, sides and sauces he creates, such as mustard and lactofermented sauerkraut, wind up in bottles on the shelves at the store, which is housed with the cafe in an 1820s farmhouse. 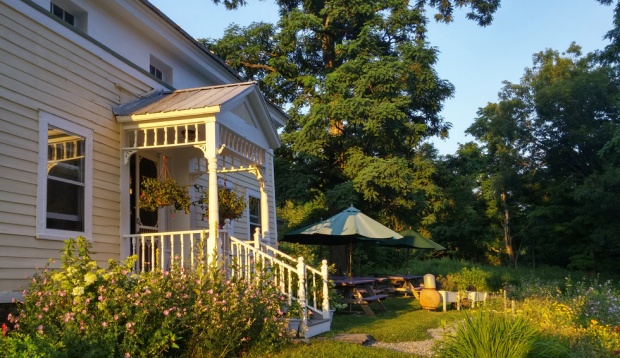 Brunch and dinner are served inside the 1820s farmhouse, or outdoors at picnic tables overlooking a mountain view. Photo by Catskill Eats

The cafe offers hand-crafted non-alcoholic beverages Handel devises, such as 20-ingredient root beer, fennel and wildflower soda and seltzer with grapefruit and cardamom bitters. A draft system, similar to beer taps, is now under construction; it will enable the farm to sell growlers of housemade sodas.

Handel sees it as part of his job to encourage his patrons to experiment with their palates. At the Supper Club dinners, he and Clement introduce each course with a little background about ingredient sourcing and preparation. He also teaches monthly cooking classes at the farm, concentrating on various techniques, such as braising.

“At one time, food literacy just wasn’t a thing; you ate meat and potatoes,” Handel said, describing his interest in pushing diners’ envelopes, one dish at a time. “Now, people I would never consider ‘foodies’ know what kombucha is.”

With Handel on board, Heather Ridge has taken its cuisine off the farm, as well, putting on events such as summer barbecues at Simply Durham Cottages and catering jobs such as a Bard College supper for 130 people.

Handel and Clement also have collaborated with The Cask and Rasher in Coxsackie to do themed dinners with beer pairings. Earlier this year, they created a dinner around Game of Thrones, the George R.R. Martin novels and HBO series, which included a whole roast suckling pig and lemon cakes, one of the main character’s favorite desserts.

At home, along with bees, Handel keeps geese, chickens, ducks, rabbits and pigs, and often takes his four-year-old daughter on food adventures such as foraging for mushrooms.

“I’ve had a great education from Carol, learning about the animals, caring for the animals,” Handel said. “People who come here also have that direct experience, talking to the chef, seeing the animals on the farm.”

Despite the four-decade-spread between them, Handel and Clement share a lot in common. Clement also grew up on a family-owned Catskill resort, Shagbark in Saugerties, and their approaches to cooking and eating mesh so closely that they recently found themselves ordering the exact same meal in a restaurant.

“I think hanging around here has rubbed off on him,” Clement said.

Find Heather Ridge Farm at 989 Broome Center Road in Preston Hollow. Brunch is served from 11 a.m. to 3 p.m. every Saturday and Sunday. The next Supper Club takes place Aug. 15 and 16 at 7 p.m. Dinner is $65/person plus tax and gratuity. Reservations are required and vegetarian options are available, with advance request. See the complete schedule and details here.

1 Comment on In the Kitchen, on the Farm, with Heather Ridge Chef Rob Handel